The Sound of Meredian Crossings

Different wave ranges of two VHF-(very high frequency) receivers which are equipped with horizontal long-witre antennas This installation has been designed for a monastery in Plasy (Czech Republic). The nave of a former chapel -which had just been restored- was an ideal place to put up the long-wire antennas. Two small parabolic mirrors reflected the sounds they received through small loudspeakers on the front wall and on the back wall of the chapel. The installation was in operation for 24 hours. Because of the shifts in the wave ranges, the sound was constantly changing. The diffusely spreading sounds were inviting spectators to wander around in the chapel directly underneath the long-wire antennas which were installed -in the shape of the cross- in a height of 8 meters. 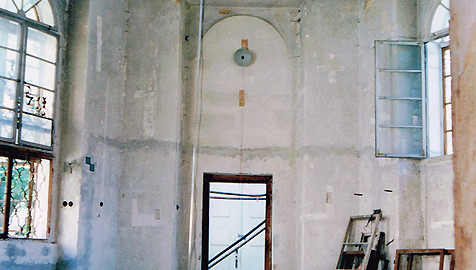